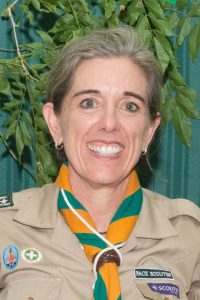 As a woman wearing many hats Sarah Chester Browne is proudest to wear that of Troop Scouter! From joining the Movement as a parent helper, she has since established the 25th Cullinan Scout Group where she continues to lead by example.

“I grew up in a family of Guides and Scouts and I’m grateful that my daughters can now experience the joy this brings too,” explains Sarah. “When my eldest daughter Katie turned 7 and a friend told me that Scouting was open to girls too, she joined the 5th Hillcrest-Colbyn Cub Pack in 2014 as it was the closest to our home at the time. I volunteered as a parent helper and soon was deeply involved on the committee. Initially I had no intention of stepping into uniform as I was well aware of the commitment involved. By 2016 I was in uniform and an Assistant Pack Scouter. We live 40 km from Pretoria so I decided to revive a Scout Group closer to home that had closed down in the nineties, namely 25th Cullinan Scout Group, where I became the Pack Scouter.

I have absolutely loved it! It has been deeply rewarding for me on a personal level to see how as Scouters we can help children grow in confidence. As a parent I strive to provide a solid value base and opportunities for my daughters to build confidence in themselves. Scouting allows me to do the same for children in our Scout Group as it puts them in situations that are new but are safe for them to take on new challenges and tackle things that might seem daunting. One such instance was during a stalking game in the dark. One of our members is a young girl who is home-schooled. She is shy and sometimes a little unsure of herself. When we started the game I wasn’t sure if she would participate, but she overcame her fear and inhibitions and completed the challenge! She felt safe in the environment we provided for her and found her inner confidence. I was so proud of her!”

In March 2020 Sarah completed her Scout Warrant and moved on to become 25th Cullinan’s Troop Scouter. “Now more than ever, Scouting continues to provide safe spaces for children who are physically prohibited from exploration,” she muses. “Research shows that by overcoming physical challenges at a young age, skills are developed to overcome fear and build confidence. Those abilities translate into entrepreneurial ability and good governance later in life. I have already witnessed this within my youngest daughter, Anwyn. She loves challenges and is not afraid of taking on big things. For her Leaping Wolf project she decided to create awareness around rhino poaching. She stood up in front of her whole school and promoted a movie night whilst highlighting the plight of rhinos. Witnessing your child develop skills that will help her forever is profound for a parent. That is truly the biggest gift that Scouting gives children: self-confidence,” she claims. 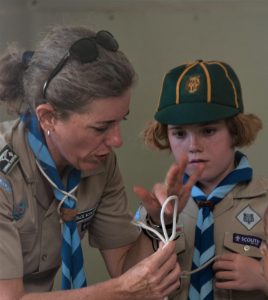 “We are a small Scout Group and are keen to welcome new members. So last year I made some posters and advertised in our community. That is how I was contacted by one of the Chief Directors of the Gauteng Department of Social Development. He saw one of the posters and wanted to invite Scouting to participate in their Boy Child Summit. The summit aimed to promote collaboration between NPO’s and NGO’s with boy child programmes as tools to curb the scourge of gender-based violence and build healthy and strong communities. With the support of the Gauteng Regional Scout team I presented our Scout programme and the impact thereof on the moral rejuvenation of our youth. We furthermore highlighted the value of our Patrol system and peer leaders who lead by example. I believe there is no teaching that compares to positive examples set by our young leaders, who often become substitute role models in the absence of fathers or other male caregivers. Furthermore, by encouraging boys and girls to participate together in Scouting, they develop mutual respect and are enabled to work as equals. This can potentially reduce gender-based violence and promote more effective communication. I truly feel that if we can expand the reach of the Scout programme and methodology to areas and communities where positive male role models are scarce, we have the potential to restructure society,” states Sarah firmly. 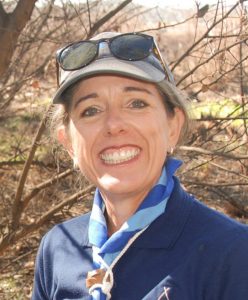 “Scouting is not only life changing for children,” she asserts. “As an adult it’s been a phenomenal experience! Being given the platform to present our programme at the Boy Child Summit was huge for me. I was incredibly nervous. I know in my heart that Scouting is effective and I was honoured to be there in name of the South African Scout Movement. I’ve also worked for myself for 23 years and feel that I haven’t developed that much as a person in more recent years. Scouting has put me in positions where I have gained new skills such as the Play-Way method, for example. Another personal highlight I remember fondly is organising my first camp. It was very fulfilling putting it all together because I watched my mother do it for the courses and camps she ran, and now finally I was doing it for myself! I get to work with phenomenal Scouting teams on so many projects. Scouting has also provided me with an extended family. Working for oneself can be isolating so being part of a team has been deeply significant for me.” 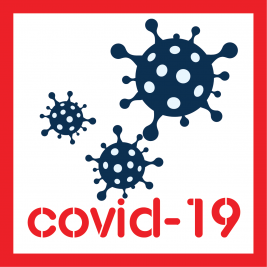 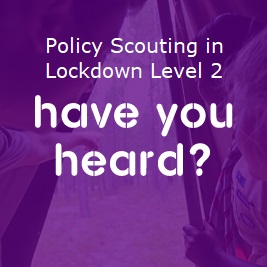