The World Scout Solidarity Fund donated towards sending four SA Scouts to the 24th World Scout Jamboree. However it was not enough for them to join the SA contingent. Once again we are humbled by the great outpour of support by Scout Groups, parents and members of the public! Thank you for your financial donations! Thanks to you, four Scouts from disadvantaged communities will now be able to experience a World Scout Jamboree as part of the South African contingent.

Thank you very much to all who donated and made this happen! Meet the Scouts that you are sending to the 24th World Scout Jamboree! 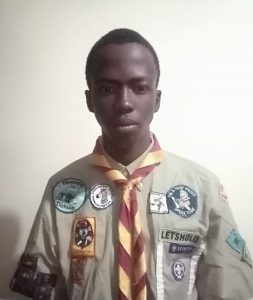 Lesedi, known to his friends as “seska” lives with his parents and two siblings in the Promosa Township in Potchefstroom. He is a Grade 9 learner at Promosa High and loves to play soccer and go camping. Once he completes Matric he dreams of joining the South African National Defence Force, particularly the Special Forces Unit. For over 7 years Lesedi has been a very dedicated Scout with the 5th Ikageng Scout Group. He is a Patrol Leader, a First Class Scout and a great team player who is always eager and willing to learn. In 2018 he was awarded the District “Scout of the year” award, which was measured against the level of work he put in within his Patrol and Scout Troop.

Lesedi’s very excited to go to the Jamboree, “From the bottom of my heart I thank you. You made it possible for me and I will forever remember that. To my funders, our national team, the North West Region, Potchefstroom District and my Scouters, I hope to make you proud!” 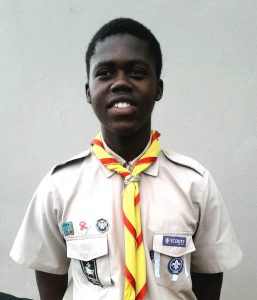 Njabulo does not let poverty get in the way of personal growth or helping others. He lives with his family is the disadvantaged community of Inanda Newtown in Durban. Most of his camp fees are being paid by his Troop Scouter because she sees the potential in him. He joined Scouting in 2012 as a member of the 1st Imbaliyamazulu Scout Group in KZN. He has obtained his Explorer badge and is already actively planning his Path to Springbok. Njabulo organises and plans almost all Troop activities as well as plans and runs camps for his Troop, District and Region.
His Troop is the face of the School Channel, runner up at Scout Rally Competitions and he has produced great Patrol Leaders as a Troop Leader. He has attended PLTC and PLTU courses and also assists as a Quartermaster in Regional Adult Courses. When needed, he travels to other Regions to help with training. Njabulo is a very polite and cheerful young man who is always available to help and who is a great team member!

Njabulo is very grateful and is looking forward to the Jamboree as well as the flight there! “It is something I have been waiting for  since I joined the Scout Movement, but I couldn’t afford judging from my background. It is a lifetime opportunity for me. What you have done for me is unforgettable , it will always be that experience i will never ever forget. It will also be my first time flying abroad and my first time on the plane. I will make sure that I will have the best time of my life and show my best behaviour as a Scout. When I am back I will share my experience. Thank you very much for your love and support to this wonderful Scouting movement, to the RC & RTC for choosing me out of massive numbers of Scouts we have in the KZN Region and to the sponsors who made all this possible. “

Sibusiso lives with his aunt in the disadvantaged Umlazi community in KZN. He joined the 1st Umlazi Scout Group in 2011 where his aunt is currently the Troop Scouter and a District Commissioner. He is very active within his Troop and District where he assists in the planning of Troop activities and the preparation and running of District camps and programmes. He is a very polite, active and skilled Scout, good in communication and team work, and who never misses a camp! He has attended PLTC and is currently working towards his First Class. Sibusiso excels academically, is trustworthy and is enthusiastically involved in community service projects such as clean-ups at old age homes and streams, and the renewal of community gardens after they were destroyed by storms.

Sibusiso is really looking forward to meeting Scouts from other continents. “Thank you to all sponsors and supporters who helped us to be part of this once in a lifetime trip to visit another continent and meet other Scouts from across the globe. This is a memory I shall never forget and shall forever cherish!”

Khaya lives in Mpumalanga and is a Grade 10 learner. He joined the Scout Movement when he was 7 years old and is currently a Patrol Leader and First Class Scout with 1st Emtfonjeni Scout Group. Khaya is also actively involved in the preparation and running of Regional training, events and camps. Khaya is a positive, friendly, hardworking, self-motivated, self-disciplined and ambitious young lad you can always depend on. He believes in achieving what he sets his mind on and does not give up, even if the road ahead seems to be steep. He is mature for his age and tackles challenges in a manner that makes one wonder how old he is.

When asked how he feels to be going to the World Scout Jamboree he said “I am about to fly to West Virginia for the 24th WSJ. My financial situation would have prevented me from attending my first Jamboree but with the help from people who opened their hearts, my dream is about to become reality. Though they have never met me in person, they have shown me the light at the end of the tunnel. To them I say thank you for opening this door of opportunity, which is a huge step for me, and for giving me strength to continue and succeed. I believe I will come back with a different view on life and will handle problems with ease as my communication skills will be improved during the three weeks to be spent in USA. You are awesome!” 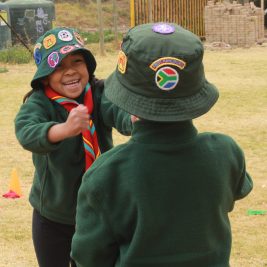 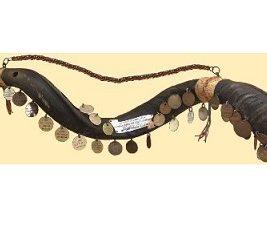